Pep Guardiola says he is disappointed Phil Foden, John Stones and Ilkay Gundogan are not part of Manchester City’s pre-season tour of the USA, admitting their absence contributes to “incredible problems” for his team.

City are currently in Houston, where they are preparing to take on Club America on Thursday before traveling to Green Bay for a fixture with Bayern Munich on Sunday.

But England internationals Foden and Stones, plus Germany international Gundogan, will miss the friendlies after failing to meet US entry requirements. Most travelers to the US must be fully vaccinated, which also prevented N’Golo Kante and Ruben Loftus-Cheek from taking part in Chelsea’s pre-season trip to the country.

The trio are training with City’s U23s in Croatia and will join the senior squad when they return from America, but Guardiola says the inability of his squad to enjoy a full pre-season together could cost them when the competitive fixtures begin next month.

Asked if he was disappointed to be without Foden, Stones and Gundogan, the manager said: “Yeah, a lot. I would like them to be here.

“The second season here [2017/18], when we finished with 100 points, that was the only pre-season when we were all together from day one. Since then it’s always four players arrive, then after a few weeks some other ones and we start the season with incredible problems. That’s why we drop every season at the beginning many, many points.

“This season I thought, ‘maybe we will be all together’, but due to personal situations with these three players, and other situations with some other ones, we cannot be together. We are delayed but it is what it is. We are going to move forward and today you have to adapt.

“Before, every pre-season was three, four, five weeks all together. Now it’s over, with the World Cup, Euro cup [European Championships] – many competitions.

“The players need rest after a tough, tough season. But they are fit, they are training with the U23s in Croatia, and when they come back they will be fine.”

‘Neymar reports are false – I’m sorry for him!’ 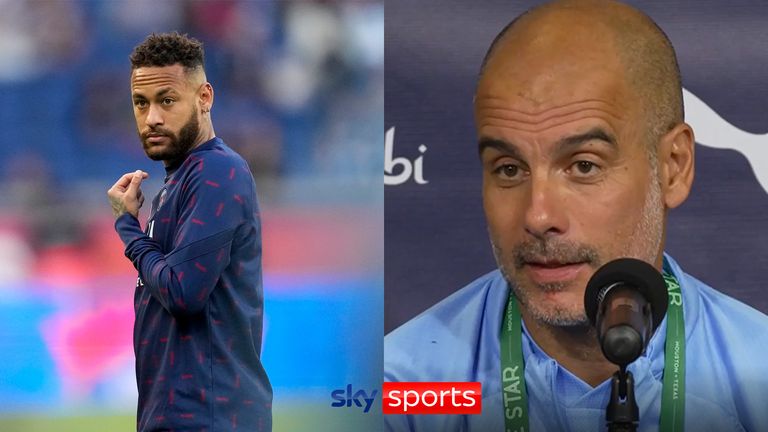 Another player who will not be part of City’s pre-season – or indeed their entire campaign – is Neymar, despite a report in French newspaper Le Parisian that the forward had been offered to the English champions this summer.

But Guardiola dismissed the claims, saying: “I’m so sorry for Le Parisian but it’s not true. I’m sorry for them because the information they were leaked was false.

“Neymar is an incredible player and, with the information I have, an incredibly nice guy. So leave him calm, let him express the huge talent he has in Paris alongside [Lionel] Messi and all the big stars they have.

“But I would say Manchester City every season bought 150 players. It looks like we are interested in all players around the world. You know that is not true. I’m sorry for Neymar, of course!” 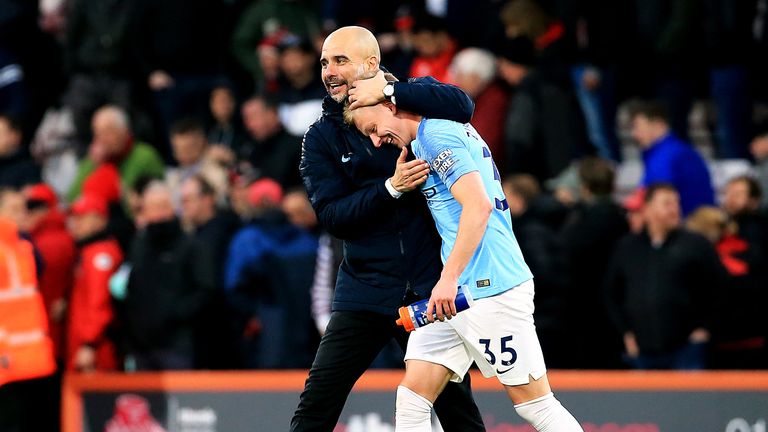 However, City are keen to sign a new left-back and remain interested in Brighton’s Marc Cucurella, as Sky SportsNews revealed back in June.

Brighton do not want to let Cucurella leave and will demand a huge offer in order to sell given the Spain international has four years remaining on his contract.

But with Oleksander Zinchenko on the verge of a move to Arsenal, City need to strengthen at left-back, and Guardiola is putting his faith in Txiki Begiristain, the club’s director of football, to find the right solution.

“We will see,” said Guardiola when asked about signing a new left-back. “I think Txiki and his department of scouting have names in every position. Txiki will know exactly what is best for the team.”

Guardiola has hailed the impact Zinchenko had at Manchester City and said the success the Ukraine international earns at Arsenal will be shared by his former club.

Ahead of Zinchenko’s move to the Emirates, the City boss said: “Like Gabriel [Jesus] and Raheem [Sterling]the impact of those three players in the years I am here has been massive.

“So we are going to miss them. They are exceptional players but, for different circumstances, they move on.

“Chelsea and Arsenal are two incredible clubs and the success and happiness they will have there will be ours.

“For myself and I think on behalf of the club, our gratitude for their effort and the way they behave on and off the pitch.

Erling Haaland, the £51m signing from Borussia Dortmund, is part of City’s tour of the USA and could make his debut against Club America.

Kyle Walker says he has been impressed with what he has seen from the striker, who scored 85 goals in 88 games for Dortmund, but warned the 21-year-old that he has big boots to fill in the shape of Sergio Aguero, City’s record goalscorer who left the Etihad a year ago.

“Erling has been really good,” said Walker. “He’s young – we have to take that into consideration.

“But from what I’ve seen in training he looks strong, he looks powerful and he looks eager, and that’s the main thing. As long as he keeps his standards, he keeps doing what he was doing at Dortmund and brings the same mentality and adapts to the Premier League.

“We all know it’s very difficult. No one really comes into a team and hits the ground running straightaway so he’s going to need time, but that’s down to us as players, managers and the club as a whole to make sure that we’re making him feel as welcome as possible.”