Everything you need to know about 2023 NBA Rivals Week

Nikola Jokic has come away with back-to-back Kia MVP awards, but he’s had to fend off spirited challenges from Joel Embiid.

The 2022-23 NBA schedule was released on Wednesday, laying out all 1,230 regular-season games that will be played from October 18 through April 9.

In addition to the marquee games that will take place during Kia NBA Tip-Off 2022, the 75th edition of the NBA on Christmas Day, Martin Luther King Jr. Day, and the return of the NBA Global Games in Mexico and Paris, the league also announced the debut of NBA Rivals Week.

Classic and budding rivalries between teams and players will take center stage for NBA Rivals Week during the week of January 23. Over the span of five days from Tuesday, Jan. 24 to Saturday, Jan. 28, rivalries will be the focus of 11 nationally broadcast games across four networks: TNT, ESPN, ABC and NBA TV.

Below is a closer look at the NBA Rivals Week schedule and what makes these matchups so intriguing.

Heat vs. Celtics | An Epic Rivalry in the East

NBA Rivals Week tips off in Miami as the Heat host the Celtics in a rematch of last year’s Eastern Conference finals, which Boston won in seven games — but only after Jimmy Butler’s potential go-ahead 3-pointer in the closing seconds rimmed out. These two teams also met in the 2020 East finals, which Miami won in six games to advance to the NBA Finals. But this rivalry predates Jayson Tatum, Jaylen Brown, Jimmy Butler and Bam Adebayo. If we rewind back to the early 2010s, it was a battle of the Big 3s with Boston’s Paul Pierce, Kevin Garnett and Ray Allen taking on Miami’s Dwyane Wade, LeBron James & Chris Bosh as Miami had to advance past Boston before pursuing championships (with Allen switching sides in the middle of their run).

Los Angeles is all about star power – both on and off the court – and these two teams have plenty of stars. The Lakers are headlined by the trio of LeBron James, Anthony Davis and Russell Westbrook, while the Clippers boast two of the top wings in the league: Paul George and Kawhi Leonard. The Lakers have dominated this rivalry historically – leading the all-time series 150-81 — though the Clippers have won the last seven meetings, with the Lakers’ last victory coming in the bubble on July 30, 2020. Can the Clippers keep the streak going in the latest edition of the Battle of Los Angeles?

Uncertainty surrounds the Nets as their schedule was unveiled.

To understand the magnitude of this matchup, you only have to look back to last year’s trade deadline when the Sixers and Nets pulled off a blockbuster trade that sent James Harden to Philadelphia and Ben Simmons to Brooklyn. The two teams met just once after the trade, with the Nets getting the better of the Sixers in Philadelphia even without Simmons in the lineup. Simmons did not suit up for the Sixers or Nets in 2021-22, but he is expected to play this season. This will not be Simmons’ first return game to Philly – that will take place on November 22 on TNT – but anytime he’s back in that arena is a must watch.

This is a rematch of last year’s entertaining Western Conference semifinals matchup, won by Golden State in six games. Unfortunately, Ja Morant injured his knee midway through the series and missed the final three games, after putting on spectacular performances in the first three: 34 points in Game 1, 47 points (including all of Memphis’ final 15 points in the final 4: 16 of the game) in Game 2 and 34 again in Game 3.

But this emerging rivalry goes beyond last year’s playoffs: Andre Iguodala is still routinely booed by Grizzlies fans after never playing for Memphis after being traded there by the Warriors in 2019. After winning the title, Klay Thompson called out Jaren Jackson Jr. for using Golden State’s catchphrase “strength in numbers” in a tweet following a Grizzlies regular-season win over the Warriors. Of course, Morant responded to that jab by saying the Grizzlies are taking up a lot of real estate in the minds of the Warriors. These two will first meet on Christmas Day, but Round 2 will be part of Rivalry Week.

The next chapter in the sibling rivalry between Chicago’s Lonzo Ball and Charlotte’s LaMelo Ball will be written during NBA Rivalry Week. Entering the 2022-23 season, the Ball brothers have played only three games against one another in the NBA, with big brother Lonzo holding a 2-1 advantage over younger brother LaMelo.

While Lonzo has more wins, Melo has put up better numbers in games against his brother: 17.3 points, nine assists and seven boards per game compared to 11 points, 5.7 assists and two rebounds per game for Lonzo. Of course, there is another layer of intrigue in this matchup as it features the team Michael Jordan led to championship glory six times (Chicago) facing the team that Jordan owns in his post-playing career (Charlotte).

This is a rematch of last year’s Western Conference semifinal series, won by Dallas in seven games. But the Mavericks didn’t just beat the odds by winning Game 7 on the road (entering the game, home teams were 110-33 in Game 7s in league history), they absolutely crushed the top-seeded Suns to advance to the West finals . Dallas never trailed and led by as many as 46 points before cruising to a 33-point win. A photo of Luka Doncic smiling while looking up at a stone-faced Devin Booker instantly became a meme and something the Suns would love to erase from everyone’s collective memory. They’ll get their first chance when the teams meet in their season opener on Wednesday, Oct. 19. But this rivalry will still be simmering come late January for Rivalry Week. 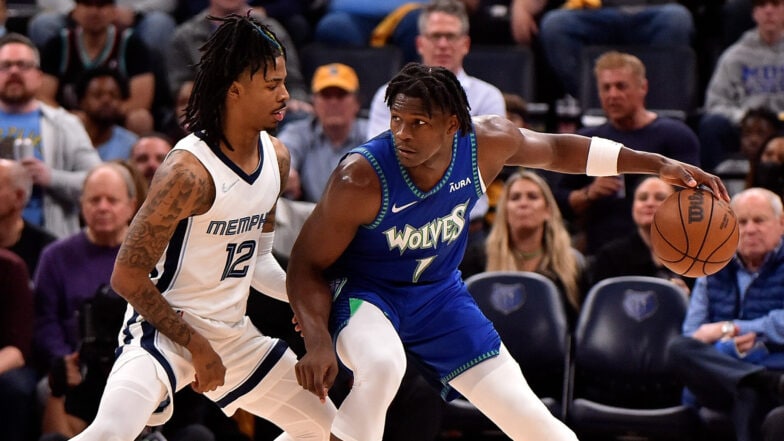 Ja Morant and the Grizzlies took a 1st-round matchup against Anthony Edwards and Minnesota in the 2022 playoffs.

This is a clash of two of the most exciting young guards in the game today – Memphis’ Ja Morant and Minnesota’s Anthony Edwards. When it comes to monster dunks, blocks and other feats of incredible athleticism and skill, these two players stand at the top of the power rankings. This is the ultimate “get your popcorn ready” and be in your seat and ready to go at tip-off. You don’t want to miss the next viral moment that either of these players – or both in the same game – come up with that sets the internet ablaze.

This is a rematch of the 2019 NBA Finals, the series that prevented the Golden State Warriors from posting just the sixth three-peat in NBA history, and the first to accomplish the feat since the 2000-2002 Los Angeles Lakers.

That series also saw the final appearance of Kevin Durant in a Golden State uniform and the first of two devastating leg injuries to Klay Thompson that kept him sidelined for 941 days. Thompson returned in January of 2022 and help the Warriors not only return to the Finals but earn their fourth title since their championship run began in 2015.

This is a matchup of the top two big men in the game today — Denver’s Nikola Jokic and Philadelphia’s Joel Embiid. These two have finished as the top two finishers in the Kia MVP race in each of the past two seasons, with Jokic getting the edge on Embiid both times. In 2020-21, Jokic won the MVP vote 971-586, but last season Embiid closed the gap as Jokic’s win was just 875-706.

Jokic is the best passing big man of this generation and is in the discussion for best ever as he is the catalyst for the Nuggets’ offense with his scoring and playmaking skills. Embiid just became the first center since Shaquille O’Neal to win the NBA scoring title as his inside-outside game is unstoppable. There is a mutual respect between the two, which was on display during last season’s MVP race; While both players wanted to win the award, they also acknowledged their happiness that either way the honor was going to a big man.

It’s the battle of the boroughs in New York City as the Nets host the Knicks at Barclays Center. The Nets have now played in Brooklyn for a decade – making the move from New Jersey in 2012 – and while New York will likely always be a Knicks town (similar to the Lakers/Clippers dynamic in Los Angeles), the Nets continue to establish their place in the hoops-crazed city. On the court, the Nets have gotten the better of the Knicks recently, having won seven straight meetings between the two dating back to January 2021.

There is no better way to close out NBA Rivalry Week than with the preeminent rivalry in NBA history – and one of the biggest in the history of sports – as the Boston Celtics host the Los Angeles Lakers. These two teams are tied for the most championships in NBA history with 17 pieces after the Lakers won the 2020 title in the bubble. The race to title No. 18 is on and any head-to-head matchup between these two teams recalls memories of some of the game’s all-time greats facing one another: Bill Russell vs. Wilt Chamberlin; Magic Johnson vs. Larry Bird; Kobe Bryant vs. Paul Pierce. Will we be able to add a LeBron James vs. Jayson Tatum matchup in that storied history? If so, the Lakers will need a major bounce back after last season’s disappointment of not making the playoffs. Meanwhile, Boston’s first bid for title No. 18 came up two wins shy as the Celtics fell to the Warriors 4-2 in the 2022 Finals.